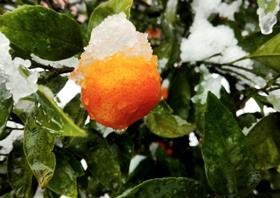 Heavy snow across large parts of Greece and Turkey came as a surprise this week, temporarily disrupting air and road traffic in both countries.

Snowstorms are rare in Athens, but Elpida was the second to hit the city in as many years, forcing Greek carrier Aegean Airlines to cancel most flights on Monday and impacting schedules this week.

Turkish authorities halted flights at Istanbul Airport due to heavy snowfall, but reportedly reopened the airport on Tuesday.

'We hope that after Friday the roads will start to open quickly and life will return to normal again,' said Mustafa Arslan of Turkish exporter MDA Agro.

He said that there had been no snowfall in the company's citrus production areas, but that temperatures there had also plummeted.

'Citrus is a very durable fruit, but with air temperatures dropping as low as -3oC several times, it was beneficial to have propeller systems in place,' said Arslan. 'These have been installed in recent years to prevent frost in our citrus orchards. This season especially, these systems have been important.'

'We have been hearing more frequent reports of frost damage from the orchards,' said Sertaç Kirmizidam of Turkish trader Kirmizidam. 'In one or two weeks' time, I think it will be much clearer what kind of damage the cold, snow and frost have caused to production.'

Istanbul Mayor Ekrem Imamoglu encouraged people to see the upside of the snow, suggesting it would help to ease the dry conditions experienced since the summer, raising water levels in dams to around 70 per cent.

'Istanbul is dependent on the snow's blessing,' he told Reuters. 'If it doesn't experience it every season as it is intended, different risks await.'

Yiğit Gökyiğit of exporter Alanar said he believed the weather wouldn't be a major issue for exporters. 'Also,' he added, 'for the summer fruits, it is OK to have such weather at this time of year.'

In Greece, problems have occurred mainly in the Greater Athens area, as well as the fire-hit island of Evia, according to Johannes Eisenbach, coordinator of Organic Marketing & Export Network (OMEN).

'The eastern part of the Peloponnese has also been affected, with some important citrus growing areas receiving snowfall,' he said. 'But it is too early for any kind of estimate on the damage to the fruit or the trees. Production areas in the western parts of the country faced, and are still facing, low nighttime temperatures near or slightly below 0oC, but are completely free of snow. In many citrus production areas, wind machines have been installed to prevent frost damage to the fruit.'