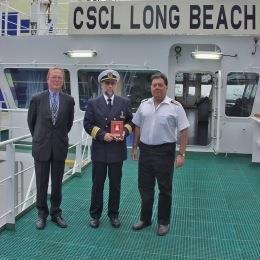 Container traffic between Asia and the Port of Hamburg reached a total of 5.6m twenty-foot equivalent units (TEUs) last year, according to the port authorities.

China remains by far the port's largest individual trading partner, shipping a total of 3.2m TEUs in 2007. In the first six months of this year, container traffic between China and Hamburg reportedly rose by 4.8 percent.

The start of the new service was heralded on Tuesday with the arrival of the CSCL Long Beach vessel alongside the HHLA Container Terminal at the Port of Hamburg in Germany.

CSCL and CMA CGM will each operate four vessels on the route as part of the service.