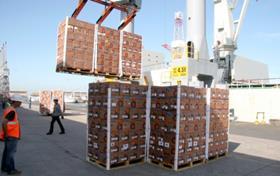 Almost exactly one year after major disruptions to exports through the port of Cape Town, and other ports in the country, exporters are facing new challenges.

This time the problem is getting enough export containers into the country to meet demand, and moving them to the intended destinations. It is therefore not only Western Cape exporters who are likely to be affected.

Shipping sources have said there is a worldwide shortage of containers and vessels to transport the fruit to preferred markets.

This is mainly the result of a booming east-west trade and it is likely that this will continue to the second half of the year.

This is not good news for any South African exporter who wants to ship produce during the next few months.

At the moment the focus is on Cape Town, from which the bulk of the late table grape crop needs to be shipped.

This port has annual problems with wind. On the north-south run shipping lines often bypass the port of Cape Town because of the wind, the result being that empty containers are not discharged there. Various other factors are also causing problems.

The fact that China has emerged so quickly and strongly after Covid-19, with trade to the Americas booming, means that rates on these routes are extremely high. “The shipping lines are following the money,” said one observer.

In opposition to this, trade shipping lines earn almost half the rate on the north-south trade or on trade from South Africa to the Middle or Far East.

In Cape Town it is not only the wind but productivity which is causing exporters, logistics operators and shipping companies’ nightmares.

It is reported that as a result of limited containers, shipping lines are now only utilising containers to markets where they can earn the highest margins.

Some lines have stopped shipping fresh produce containers from South Africa to the Far East, while some lines only accept limited numbers of containers for trade with the Middle East.

For the South African table grape business the present problems comes at a bad time. The Hex River Valley has been packing record volumes over the past two weeks and coldstores are running a full capacity.

The nature of the product is such that it must be loaded out in containers the moment the grapes are cooled sufficiently. Lack of containers could hamper the late export operation.

Despite these problems, SATI Chairman Anton Viljoen remains positive for the last weeks of the harvest. “It is taxing for us as we have commitments to fulfill. We have another two weeks to go and we expect the late market to be positive.”

One shipping source said that the current situation is another indication of how Covid-19 has changed the world. “I cannot see that the situation will improve much until the second half of the year.”

Industry executive Deon Joubert said the problems would not merely go away by sitting down with either port authorities or shipping companies to try and resolve the situation.

“It is time that everyone worked together to find solutions or else the future for the export industries could be bleak,' he outlined. 'We need to realise that the name of the game has changed and we are working in a new environment.”