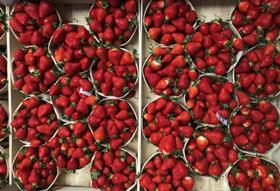 Sustainable consumer brand ‘C’est qui le patron?’ (or ‘Who’s the boss?’), which was launched in 2016 by French waste pressure group Gueules Cassées, has been forced to halt sales of strawberries this year.

The brand is the first true consumer label, according to founder Nicolas Chabanne, since it consults with consumers online to come up with the requirements for the product, including a fair return for the producer.

However, despite the popularity of ‘C’est qui le patron?’ (CQLP) strawberries since their introduction in 2018, issues with packaging and waste have persuaded the company to perform a U-turn.

“Although we regret it a lot – they were so good – we will be forced to end sales of CQLP strawberries this year,” the group posted on Facebook. “You enjoyed this spring product, which we all created together, but several factors have forced us to maintain the consistency of our principles #transparency.”

Two types of packaging were chosen by CQLP to fit the criteria chosen online by its consumers. “Unfortunately, these have generated more complexity for producers, as well as for stores,” the Facebook post read.

The first year’s packaging burdened producers with multiple weight checks, while the choice for the second year served to accelerate the fruit’s decay. Due to packaging problems, the product struggled to convince retailers, while the delicacy of the fruit led to increased waste.

On the production side, although growers received a fair price, the value added was apparently less than expected, with existing value added labels like “The Taste Medal” already serving the same purpose.

“In short, we always ensure consistency between the specifications that we all decide together, the objectives of the initiative and the benefits, which must be positive and must meet the expectations of producers in particular,” the group stated.

The initiative currently has a range of more than 30 lines, available in more than 12,000 stores across France. CQLP is now preparing to launch its first UK product (fresh eggs), according to David Poussier, co-founder of CQLP’s arm in the UK, where the range will be marketed as The Consumer Brand.