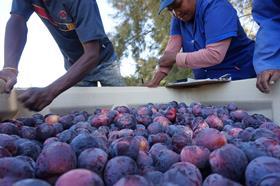 South Africa’s stonefruit season is officially underway with exports so far originating mainly from the northern regions of the country.

By all accounts, South Africa should have another good season in 2021/22, although, exporters and growers have said it is far too early to make firm predictions.

It is clear, however, that plum growers will need a much better season than last year in terms of returns from the market to survive. While the industry had excellent crops in 2020/21, the markets failed to respond with adequate returns.

This came after a few years of disappointing crops, particularly for plums and apricots, but reasonable growth in nectarines and peaches.

Markets and trade manager at Hortgro, Jacques du Preez, recently stated that South African plum growers were on the doorstep of a make-or-break season that would determine their future and sustainability.

He said plum producers, as well as many other many other growers, had faced several challenges over the past five years.

“We had a severe drought, a Covid-19 pandemic, logistical threats, and then finally, when production recovered during the 2020/21 season, returns to growers were below cost and breakeven prices,' du Preez explained.

Plum returns per carton were 30-40 per cent lower during the 2020/21 season compared with the previous year.

“What should have been an exceptional season for growers turned into the exact opposite,' he outlined. “According to our estimates, input costs through the production and logistical chain will increase dramatically in future.”

This could include a 30-50 per cent rise in sea freight, 40 per cent for haulage in the UK, between 20-30 per cent for fertiliser and crop protection, electricity by 16 per cent, wages on the farms by more than 15 per cent and packaging by between 10-15 per cent.

“Plum growers will simply not be able to survive the coming season based on the returns of the 2020/21 season,' du Preez warned. 'We cannot accept price decreases. In fact, prices need to be increased substantially to compensate for the realities of the cost structures.”

Early fruit from the northern regions is mainly exported by air to the Middle East with small volumes also shipped to the UK and Europe.

The early season will be in full swing from October onwards and will see sea shipments from Cape Town.

Although there is no certainty yet of the early stonefruit crop forecast, exporters believe that there will be a further recovery in apricot volumes.

Apricots have been in decline for several years but last year saw an increase in production. The apricot industry had been affected mainly by drought in certain production regions in the Cape, but growers believe that prospects are better this year.

The Cape regions had a very wet and cold winter which normally transcribes into good production and fruit quality. There is enough water available and from a production point of view the industry should have another good year.

From a logistics point of view, a lot has written recently about problems in obtaining enough containers in South Africa for the country's exports.

Although demand from the bigger industries is expected to slowly decline over the next month or two, inefficiencies in the ports and the problems which resulted in container shortages are likely to continue.