Dole in talks with Banacol 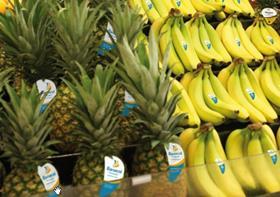 Rumours that Dole is to acquire all or part of Colombia’s Banacol have intensified in the wake of Chiquita’s announcement that it is to merge with Fyffes earlier this month.

Reefer Trends reported that Dole was expected to make an announcement shortly about a deal that would see the multinational assume control for the marketing of all Banacol fruit in the US and possibly Europe. Other sources suggest that Dole could acquire a 40 per cent stake in Banacol in the coming months.

Both companies are known to have been in high-level talks for several months although the extent of the negotiations is unknown. A deal would benefit both companies as it would help shore up Dole’s market share following the Chiquita-Fyffes deal and reduce direct sourcing opportunities for retailers.

Over 95 per cent of the bananas marketed by Banacol are grown on its own farms in Colombia and Costa Rica, where the company owns around 8,700ha. Last week the company announced a financial restructuring plan as it struggled to deal with mounting debts caused by rising production costs, low banana prices and an unfavourable exchange rate.