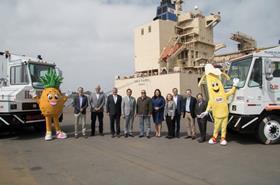 The move was announced during a ceremony at the fresh produce group's terminal yard at the Port of San Diego, California

According to Dole, the project has funded five new electric utility tractor rigs (UTRS) to add to its growing electric fleet of container transfer trucks.

These new terminal UTRs, adding to two existing electric vehicles currently in operation at the facility, are funded in part via the Clean Off-Road Equipment Voucher Incentive Project (CORE) administered by the California Air Resources Board (CARB).

CORE is intended to accelerate deployment of advanced technology in the off-road sector by providing a streamlined way for fleets to access funding that helps offset the incremental costs of such technology.

With the changes, Dole said that it affirmed 35 per cent of its port transfer UTRs were electric, well on its way to meeting the company goal to be 100 per cent electrified in its UTR fleet by 2030.

“Dole is strongly committed to being a change agent in combating climate disruption and adding electric vehicles to our operations is one area we can make positive emissions impacts,” said Nelson Montoya, president of Dole Fresh Fruit North America. “Combining Dole funding with these CORE grants exemplifies that private business can take meaningful initiatives to pursue sustainability.”

“In developing the MCAS, we recognised that regional collaboration would be critical in making major air quality and public health improvements on our waterfront and in our neighbouring communities,” said chairman Dan Malcolm, Port of San Diego board of port commissioners.

“Dole, a longtime and valued port tenant, has been an early adopter and supporter of electrification technologies,' Malcolm. 'It’s wonderful to see they’re able to continue to take advantage of available state funding to help meet both their environmental goals and ours.”

Dole said that it was striving to exceed compliance plug in requirements, and would be announcing a partnership with San Diego Gas & Electric to build a new fleet charging station at Dole’s facility at the Port’s Tenth Avenue Marine Terminal.