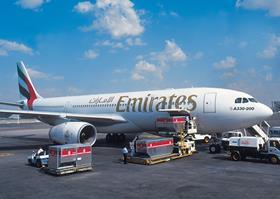 Dubai-based Emirates has announced that it is set to boost international links with Africa by starting thrice-weekly flights to Angola in August.

The Dubai-Luanda service is the second new African route to be revealed by the airfreight specialist this year, with flights to Durban in South Africa beginning on 1 October.

An Airbus 330-200 will serve the Angola route, with flight timings allowing good connectivity with arrivals from Emirates points in Asia and Australasia, the group said.

Perishables such as fruit and flowers are expected to feature amongst Angola's exports on the route, according to Emirates SkyCargo, which will provide up to 12 tonnes of cargo capacity in the bellyhold of each aircraft.

'This new Luanda flight provides enormous potential to develop` air travel into Angola, alongside the assistance we can provide for international trade through Emirates SkyCargo,' said Emirates Airline president Tim Clark. 'In the past year we have seen strong growth in Africa of 17 per cent – now, with Luanda starting August and Durban starting later in the year, this is going to be another very exciting year in this largely untapped continent.'