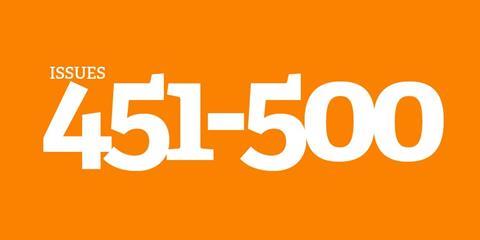 We have selected one important story from each of our previous issues, giving you a snapshot of key developments in the European fruit and vegetable market during the course of our 44-year history. Below, you can see what the key stories were in issues 451-500.

To secure your copy of Eurofruit's 500th issue, please contact subscriptions@fruitnet.com. Or view the entire magazine for free online here.

#451 May 2012
CVVP says it is winning its legal battle over Nadorcott clementines.

#452June 2012
Doubts still persist in the German market a year on from the E coli outbreak, with pesticide residues still very much in the spotlight.

#453July 2012
As the London Olympics gets underway, the UK industry looks to take advantage of an expected rise in demand through promotions and offers.

#454August 2012
Recovering from Psa, Zespri launches its new SunGold kiwifruit variety in Europe at a special ceremony in Belgium.

#457November/December 2012
The merger of Mechelse Veilingen and Coöbra to form BelOrta is seen as a major boost for Belgian fresh fruit and vegetable growers.

#459February 2013
The EC is urged to act over limited availability of plant protection products that 'threatens European crop diversity”.

#460March 2013
A financial aid package for growers in the EU’s outermost regions is approved by MEPs.

#463June 2013
The EC considers a ban on three neonicotinoids apparently linked to a decline in bee numbers.

#465August 2013
Croatia joins the EU, opening the doors for it to export produce including clementines to other EU members states.

#466September 2013
Good news for the exotic fruit trade as a free trade agreement between the EU and Colombia comes into effect.

#467October 2013
Spanish group Casi is in bullish mood ahead of the country’s tomato season.

#470February 2014
Dutch marketer The Greenery undertakes a major restructuring of its business following a series of poor financial results.

#472April 2014
Chiquita and Fyffes reveal they are planning to merge their operations, creating the world’s largest fresh produce company.

#474June 2014
Jeff Correa of Pear Bureau NorthWest warns that inaction over DPA regulations could destroy the US group’s business in Europe.

#475July 2014
The unfolding Crimea crisis hits potato and vegetable farmers in the peninsula.

#477September 2014
Russia bans imports of all EU fresh produce imports, a move that will have major implications for international trade in years to come.

#481February 2015
Opal Apples rocket up to the International Space Station.

#483April 2015
Russia’s ban reportedly results in only 40 per cent of Poland's potential apple exports being shipped.

#484May 2015
Panama disease discovered in banana plantations in Pakistan and Lebanon.

#493March 2016
Several of the world's leading avocado-producing nations come together to form the World Avocado Organisation.

#494April 2016
A campaign urging retailers to include wonky fruit and veg on their shelves gathers momentum in Europe.

#497July/August 2016
After the UK votes to leave the EU, Brexit casts a shadow over the future of its fruit and vegetable business.