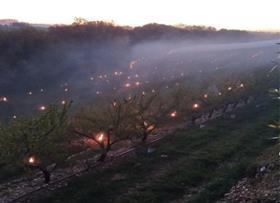 The recent cold spell that was experienced throughout much of Europe generally spared French peach and apricot producers, according to Raphaël Martinez, director of AOP Pêches et Abricots de France.

The temperatures recorded in the south-eastern region of France did not reach the records of last year, when the country’s peaches and apricots were badly hit.

Following last year’s experience, producers were well prepared, fighting for several nights to protect the most important part of their crop.

Thankfully for growers, temperatures rarely dipped below -2°C, according to the association, while the “configuration of cold air masses, the proximity of the Mediterranean coasts and, above all, the wind made it possible to avoid the worst'.

However, some hillsides in the Rhône Valley, the upper Têt valley (Prades) and the Baronnies region were reportedly heavily impacted once again.

“This cold wave has, it seems, severely affected other European regions,' the AOP stated, 'in particular northern Spain: Lerida (Catalonia), Huesca and Zaragoza (Aragon), Navarre, León and Rioja. All of this information will be disclosed during MedFel’s European apricot harvest forecasts on 28 April and on 24 May as part of MedFel Tuesdays.”