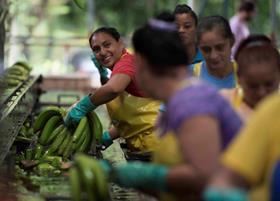 Fyffes has chosen to focus its European donations allocation on charities that support women facing sex-based violence, including domestic violence, ahead of this year’s International Women’s Day.

The company has donated just under €30,000 to charities that support female victims of violence, including Women’s Aid Ireland, Women’s Aid England and Scotland, bff:Frauen gegen Gewalt ‘Women Against Violence’ in Germany, and Blijf Groep ‘Stay Group’ in The Netherlands.

This is one of Fyffes four priority focus areas for its donation allocations, along with nutrition, climate change resilience, and education.

At the same time, to continue to support its own people and those within its supply chain, Fyffes has published its Global Anti-Violence and Harassment Policy recognising the ILO Convention No. 190, which was adopted by the International Labour Organisation in June 2019 and outlines the right of everyone to a world of work free from violence and harassment, including sex-based violence and harassment.

In Latin America, where most of Fyffes produce is grown, improving women’s equality is a major priority, both in the region and in agriculture as a sector.

This was confirmed when Fyffes undertook its first Human Rights Impact Assessment in late 2019 and 2020. As a result, Fyffes goal is to support and promote the inclusion of women into the workforce as equal partners with men and create a more inclusive workplace.

The company first launched its women’s equality training programme, based on Business for Social Responsibility (BSR)’s HERProjectTM, in Honduras and Costa Rica in 2019.

In addition, Fyffes partners with several expert NGOs in Latin America, as well as customers, to empower women and reach its two gender-related targets: to provide training to 100 per cent of people at its own sites in Latin America by 2025 and 50 per cent of its suppliers sites by 2030; and to eradicate the gender pay gap in our own operations by 2030.

Due to the constraints to classroom-based training during the Covid pandemic, Fyffes worked with BSR on a digital-based solution (HERessentialsTM), adapting it to the Latin American region and which is already being used in Belize, Costa Rica, Ecuador, and Honduras, with the aim of achieving the company’s first target.

According to United Nations Women, the Covid crisis has resulted in what it terms ‘the Shadow Pandemic’, as levels of domestic violence and all types of violence against women and girls has intensified due to factors resulting from the pandemic.

Speaking about the commitment to the European charities, Stella Davis, who leads Fyffes Gender Equality Programme, said: “I am very pleased that our European businesses have chosen to concentrate their focus on this very important issue facing women across the world today.

“The money will be used very well, including funding hotlines in multiple languages to assist migrant women who are particularly vulnerable and providing immediate funds for women and their families who often have no possessions when they walk away from an abusive relationship.”