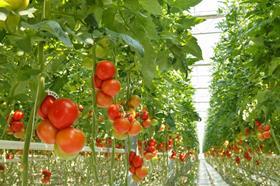 Europe’s glasshouse growers are turning down the heat due to soaring gas bills, making high prices and shortages of salad veg likely in the UK, according to the Irish Examiner.

The supply of tomatoes, cucumbers, peppers and cut flowers is predicted to fall from the Netherlands, where an estimated 2.4 billion cubic meters of natural gas a year is needed to heat 25,000 acres of high-yielding glasshouses, the report said.

As gas prices rose to a record high level in December, Dutch glasshouse owners reacted by turning down the heat or leaving greenhouses standing empty, it said. Huge Dutch greenhouses are now running at 50-80 per cent of usual heat input, which could reduce crop output by about 10 per cent.

Dutch exports of greenhouse produce were estimated at €9.2 billion in 2020, the report said, and the UK is top importer.

Meanwhile, many British glasshouse growers didn’t go ahead with their normal January crop plantings because of high gas prices and the lack of workers, the paper said.

The report states that 60-70 per cent of growers didn't plant their usual January crop in Hertfordshire’s Lea Valley, which has 370 acres of glasshouses and is known as London's Salad Bowl, producing75 per cent of Britain’s cucumbers, sweet peppers, and aubergines.

A spokesperson told the Irish Examiner that the high gas price and the lack of workers made it too much of a gamble to plant in January.

The spokesperson added that, even if gas was affordable for heated production, not enough workers can be found in Britain to grow or harvest crops because Brexit stopped the free movement of workers.

The Irish Examiner said British retailers may have to rely on increased imports as a result, but may find the supply of those reduced because EU growers can’t handle the high heating costs either.