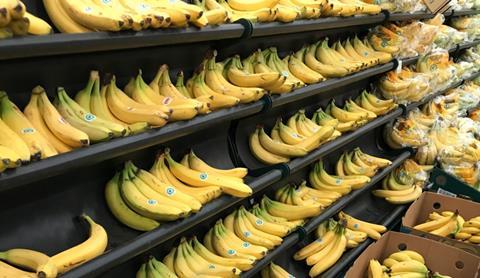 Landing the right colour of banana in the right market at the right time looks set to become even easier in the near future, following the emergence of new technology that is reckoned to slow the fruit’s ripening process and extend its green life to around 70 days, double the current average.

His assessment was that the system extended shelf-life and limited ripening in a more efficient and environmentally friendly manner than other methods.

The filter, which consists of a breathable membrane that can be placed in banana boxes, is reported to have greatly reduced the likelihood of bananas ripening in transit, and therefore being rejected by supermarket customers.

It’s Fresh! founder Simon Lee told The Times: “Our technology is allowing growers to ship their bananas longer distances to markets they are having difficulty reaching now.

“If you want to ship to China or Russia, the extra time it takes creates problems with as much as 20 per cent arriving out of specification. These bananas have to dumped.“

It is estimated that the technology could prevent up to 250m bananas from going to waste each year, helping the environment by reducing the amount of methane created when that waste food decomposes.