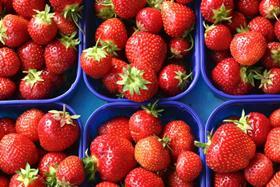 Such results seemed improbably at the end of last spring, when turnover lagged by 8 per cent compared with the previous year due to low strawberry supplies and moderate prices during April.

'Tomatoes had a lukewarm start and cucumber was downright bad in the spring,' the company revealed in its annual report. 'Peppers were the only product that consistently performed at a reasonable level.'

However, the high vegetable prices of early summer more than compensated for the disappointing spring, not least for cucumbers.

By the end of the year, higher tomato volumes were making up for moderate prices, while strawberries enjoyed a strong October and November, followed by a traditional slowdown into December before the excellent prices of the Christmas and New Year period.

Following a highly satisfactory year, the auction has revealed its intention to further professionalise the cooperative and to focus on building up knowledge and expertise.