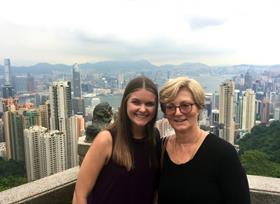 Florida-based IMG Citrus has announced the upcoming retirement of its vice-president, Veronique Sallin, after 40 years with the company.

Sallin’s retirement will officially begin at the end of the 2019/20 Florida season, while IMG has also announced the promotion of Sydney Allison to the role of director of sales.

During her tenure with IMG Citrus, Sallin built and maintained strong relationships with customers worldwide, helping establish the group's brand and reputation.

Sallin will remain involved through the Florida season as a direct consultant to Allison and the team in order to facilitate a smooth transition.

Allison has been with the company since 2016. Her career within the company advanced rapidly, beginning with her role as the export-import programme coordinator, before progressing to sales manager.

“Over the years, we have learned that our most successful hires were based on strong value alignment between the candidate and our company,” said Sallin. “Sydney’s entrepreneurial spirit, strong work ethic, passion for her work, and interest for the customer embodies our company’s core values, making this a strong match.”

As director of sales, Allison will construct and implement the sales strategy, reporting directly to IMG Citrus president, Michel Sallin, as an executive role.