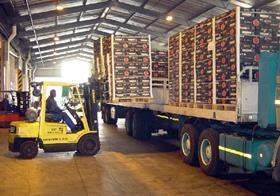 The longer-term effect of this week's violence in certain regions of South Africa is starting to emerge, and it is clear that serious damage has been done to the country’s reputation and its ability to conduct normal business.

The most serious issue has been that one of the largest refineries has been shut down, meaning that fuel shortages may be experienced across the country.

Media reports have said that that users of rail and road freight have been warned that they may be hit by shortages of fuel.

The country’s automobile association has warned the public of fuel shortages in the future, sparking some panic buying. Consumers and users in other parts of the country will be equally affected.

However, despite all this, there is no danger of immediate shortages of food going to overseas markets.

The final impact on the country’s export sector will take some time to calculate. While the immediate problem is to get fruit exported through the port of Durban, fuel shortages will be felt by all sectors of the produce industry across the country.

Reuters reported that the Durban port had suffered major disruption after days of unrest, and operations have also been severely affected at the Richards Bay port and by the national rail line, logistics and freight companies.

The South African Petroleum Refineries (SAPREF) announced that its major oil refinery had been shut down. The company, speaking on behalf of Shell & BP SA Petroleum Refineries, declared that it was impossible to carry out its normal service level agreement in the light off the present situation.

“As a result of the foregoing, SAPREF hereby declares the occurrence of an event of force majeure, excusing SAPREF from performing under the agreement,” said Pensilla Billat, SAPREF spokesperson.

State logistics group Transnet said in a statement that service levels at Durban and Richards Bay were impacted 'as the entire supply chain is closed,' including roads into and out of the ports.

Transnet has also declared force majeure on its route between Gauteng and Durban and logistics companies have reported that containers needed in the interior were stuck at the port of Durban.

The South African Association of Freight Forwarders told Reuters that port health services at Durban had been closed, effectively preventing vessels from berthing because Covid-19 testing could not be carried out.

Today is the fourth day of violence with major shopping centers and distribution centres being ransacked and destroyed.

It is unlikely that activities such as the flow of citrus fruit to the port of Durban will return to normal this week.

There are few willing to speculate about the long-term implications for the country as it is trying to come to terms with his third wave of Covid-19 infections against the background of failing medical services and the inability to increase vaccinations.

At present there is no fear that there will be immediate shortages of South African citrus in overseas markets. Observers said that the diversity of the country's fruit regions and the ability to ship through other ports would mean that supplies should be maintained in the interim.

There is also presently enough fruit available in most markets to meet immediate demand. The effect of this week’s violence could possibly be felt only around three weeks to a month from now.