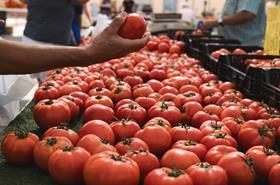 Spanish fresh fruit and vegetable imports grew 7 per cent in value this January, rising to €257m euros, with an average price increase of 6 per cent.

Morocco is Spain's leading tomato supplier, with 11,133 tonnes of the total 13,033 tonnes imported in January coming from the north African nation.

The average price of imported tomatoes grew by 21 per cent, standing at €1.20 per kg.

According to Fepex, bananas, apples and kiwifruit were the most popular fruits for the domestic market.

The average price of imported fruit stood at €1.3 per kg, 1 per cent higher than in January 2021.

'The statistics for the month of January show a notable growth in the value and average price of vegetables purchased by Spain abroad, promoting the attractiveness of the national market for fruit and vegetable production from third countries,' Fepex stated.