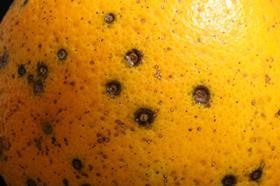 Intercitrus, the Spanish orange and mandarin professional body, is ramping up the pressure on the European Commission to strengthen phytosanitary controls on EU citrus imports from third countries.

The body met with Spanish MEPs this week to form a lobby group calling for Brussels to enforce a requirement that imports are subjected to cold treatment during transit to prevent the arrival of pests such as false codling moth and diseases like citrus black spot.

It follows a record number of interceptions of citrus consignments carrying pathogens this year. More than 200 detections had been made to 6 December, over half of them in arrivals from South Africa and Zimbabwe.

Intercitrus warned that a failure to act now would mean that “in three years’ time the pest situation will become irreversible” accelerating the abandonment of farms.

The MEPs pledged to raise the visibility of the issue in Brussels and to seek political alliances between other member states affected by these pests. Further meetings are planned for next year.