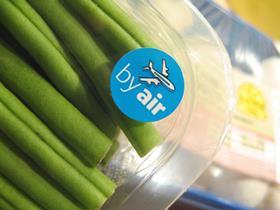 Following a successful test run this week, Kenya Airways is due to start flying fresh produce from Kisumu International Airport, according to AllAfrica.

Valentine Muruli, head of quality control at the airline, said the flight would operate twice a week from 8 January.

Since the start of the Covid-19 pandemic, the drop in passenger numbers has pushed many airlines to shift to carrying more cargo.

The trial run was reportedly attended by officials from the Kenya Revenue Authority, Ministry of Health and Kenya Plant Health Inspectorate Services (KEPHIS).

Also in attendance was Edward Ouko, chairman of Kisumu Lakefront Development Corporation, who said that the region, especially its farmers, were ready to start exporting.

Ouko appealed to farmers to continue planting fresh produce and to choose Kisumu International Airport, instead of transporting their produce to Nairobi for onward shipment.