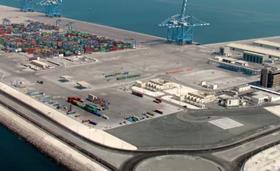 CSPL will reportedly have a controlling stake in the joint venture, which will operate the Abu Dhabi terminal for a total of 35 years, with a renewable period of five years.

Sultan Ahmed Al Jaber, UAE minister of state and chairman of Abu Dhabi Ports, commented: “The signing of the concession agreement between Abu Dhabi Ports Company and Cosco Shipping Ports Limited will significantly expand trade between China, the UAE and the broader region.”

Wan Min, president of CPSL, added: “Abu Dhabi’s Khalifa Port is a strategic hub along the ‘One Belt One Road’, as it has unique geographical advantage for the development of terminal and logistics businesses.”

CPSL will operate a container terminal with a draft depth of 18 metres. Of the 1,200 metres of quay wall and adjacent land, 800 metres is expected to be operational in the first quarter of 2018, with the rest due for 2020. The deal also includes an option for a further 600 metres of quay to allow for future growth.

The concession area will measure around 70ha, with three berths adding 2.4m TEU a year to the port’s existing capacity of 2.5m TEU.

The extension of the quay wall forms part of Khalifa Port’s wider development, including the creatrion of a regional liner hub and transhipment business to South Asia and the growth of the adjacent Khalifa Industrial Zone (KIZAD).