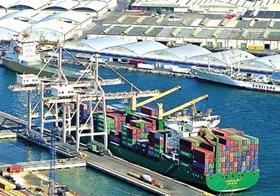 Slovenia’s Port of Koper is continuing to enjoy good growth for its fresh produce business, following another milestone performance in 2017 when it reportedly broke new throughput records in almost all cargo segments, including perishables.

This year, the trend appears strong for fruit and vegetables, with arrivals of Egyptian potatoes (mainly for Germany), oranges (mostly bound for Czech Republic and Poland) and table grapes (for Germany, Netherlands, Scandinavia and the UK) said to be booming.

“In peak season, we received two direct vessels per week loaded with up to 450 40ft reefer containers,” reveals Milena Slobko-Jerman, sales and marketing manager at port operating company Luka Koper. “The season is slowing down already, but we are close to finishing with 2,000 containers of grapes in just two months, which is much more than before.”

Koper certainly appears to have positioned itself successfully as a useful transit point for a range of different products. As well as helping Egyptian and Israeli exporters reach key European markets, it has also provided a launchpad for Polish apple exports to parts of the Mediterranean and the MIddle East.

“Our advantage remains that all port community services, including inspection and customs, are available seven days a week, with the same high-quality performance at weekends as on any working day,”Slobko-Jerman adds.

In general, she says, container connections between Egypt and Koper are improving every year as more services are added. The shortest transit time is now just 4-5 days, with Hapag-Lloyd.

“With Israel we have two direct container services weekly, calling at Koper as first port in the Adriatic after Haifa and Ashdod, and with a transit time of 3-4 days, same as with Egypt during the grape season,” she adds. “We also receive also bananas, mainly for Slovenia, Croatia and Bosnia.”