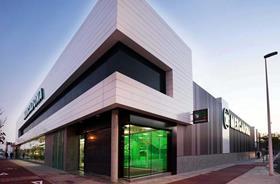 Mercadona has expanded its online shopping service to customers in Barcelona after opening a new distribution centre in the city.

The mobile and web interface, which made its debut in Valencia in March 2018, is designed to be more user-friendly and offer more product information. It will initially be available across four postal codes in Barcelona and will be rolled out to the rest of the city in the coming months.

The service is based out of a new €7m logistics centre in the Zona Franca industrial estate called Colmena, which the retailer says will allow for an eightfold increase in productivity and efficiency by centralising the preparation and delivery of orders.

The 10,500m2 facility will dispatch orders on the same day they are received to guarantee freshness, employing a fleet of 50 vehicles featuring differentiated temperature zones for different products.

Mercadona said it hopes to expand the service to Madrid at the beginning of next year.

“After the success in Valencia of the online purchase of Mercadona during its first year of life, today we arrive in Barcelona with the assurance that this service has enormous potential, we anticipate that the launch in this great city will be a significant milestone in the firm commitment of the company to address the challenge of online sales in food,” said Juana Roig, general director of Mercadona’s online shopping project.

Separately, the retailer announced that it is set to enter the Portuguese market in July, with the first stores opening in Vila Nova da Gaia, Matosinhos, Maia and Gondomar.

Mercadona has invested around €160m in the country and aims to have opened 10 Portuguese stores by the end of the year.