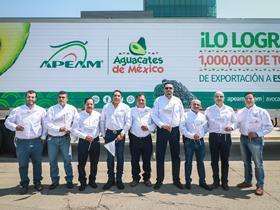 Mexican avocado exports to the US have broken through the 1m tonne barrier for the first time ever.

The Association of Producers and Packers of Avocados from Mexico (Apeam) said the success of sustained marketing campaigns under the Avocados From Mexico brand has made the product a global icon and allowed the sector to boost its position on the international market season after season.

“Thanks to the fact that producers constantly strive to plant and harvest a clean and quality avocado, we have managed to exceed 1m tonnes exported to the US during the 2021 season,” said Gabriel Villaseñor Zurita, president of the association.

This has followed a trajectory of sustained growth in the US, where per capita consumption has increased from 500g to 3.5kg.

In recent years, the sector has worked towards greater market diversification and today, Mexican avocados are exported to 34 countries worldwide, including Canada, Japan, Europe, China and South Korea.

The Mexican avocado industry is mostly made up of small producers with 64 per cent of farms being between 1 and 10ha.

“The growth of the avocado export industry has had an impact on the decrease in migration. It is estimated that approximately 100,000 families have found a well-paid source of employment in the sector and have chosen to stay in their land of origin,” said Villaseñor.