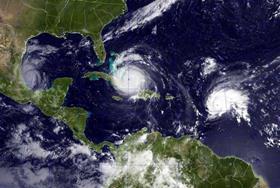 The earthquake that struck Mexico on 7 September is believed to have damaged several thousand hectares of agricultural production.

Preliminary reports from the Ministry of Agriculture show that the states of Colima, Coahuila, Chihuahua, Guerrero, Jalisco, Michoacán, Oaxaca, Puebla, Quintana Roo, Sinaloa, Veracruz and Yucatan have between then filed notice of losses for just over 138,000ha of crops including bananas, coffee and corn.

Measuring 8.2 on the Richter scale, the earthquake was the strongest the country has experienced in the last century.

The federal authorities are carrying out field inspections to assess the extent of the damage and more detailed estimates will be released over the coming days.

Meanwhile, Hurricane Katia, which struck Mexico on 8 September, affected more than 200,000ha of maize, pineapple, papaya, banana and other crops in Veracruz, according to initial estimates.

Luis Gómez Garay, the national leader of the General Workers’ Union, Peasants and People’s Union (UGOCP), said banana crops were the worst affected with at least 1,500ha in the north of Veracruz, equivalent to 10 per cent of the state’s total production, severely damaged by the high winds.

Some municipalities, including San Rafael and Atzalan, lost up to 60 per cent of their production. Gómez said around 1,200 producers had been affected by flooding and fallen plants.