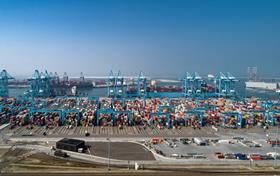 The Netherlands was the largest EU importer of fruit and vegetables from third countries in the first half (1H) of 2021, with 32 per cent of the total.

In total, imports through the Netherlands accounted for 3.7m of the 11.4m tonnes imported by the EU from third countries.

This 3.7m tonnes represented growth of 7 per cent when compared with the same period in 2020.

In value terms, imports totalled €4.51bn, 3 per cent higher, according to the latest data from the European Statistical Office (Eurostat) processed by Fepex.

The role of the Netherlands as an importer of non-EU fruit and vegetables has become more important, growing by 26 per cent in the last five years from 3.5m tonnes in the opening half of 2016 to 3.7m tonnes in 2020.

After the Netherlands, the second largest importing country was Belgium with 1.5m tonnes in 2020.