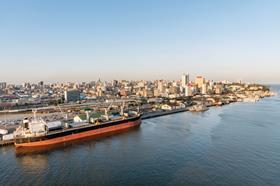 The CGA’s Mitchell Brooke said plans for operations through the port 2022 were fast taking shape.

“However, most people liken developments in Maputo to the ‘chicken and the egg’ scenario,' Brooke said. 'Should growers wait for the ships, or should shipping lines wait for the cargo?

“Well, it seems as though the chicken has arrived, and the egg has hatched,' he said. 'Several growers and their export agents have committed to several containers a week, which caused enough interest with CMA CGM to place a ship a week at the port.”

The port of Maputo on Southern Africa’s east coast has always been in the sights of South Africa exporters, especially those in the north of the country who experience congestion at the port of Durban each year.

Durban is South Africa’s busiest citrus port and is crucial for shipments to the East.

For some years now the CGA has tried to promote Maputo as an alternative, but shipping opportunities from the port have been limited.

Brooke said that reefer containers were already on the ground, passed by the certification agency, PPECB, waiting to load.

“The immediate focus is on exports to Far East countries that do not require cold treatment or pre-cooling as the containers will be packed ambient from a facility in Maputo.”

Efforts are underway to possibly ship cold treatment containers to China from Maputo this year – a DALLRD approved inspection point is being prepared, as well as PPECB approval of a cold treatment facility in Malelane in Northern South Africa.

'These facilities must be pre-approved by the Chinese authorities first,” Brooke continued.

At this stage limited containers are being planned for 2022, but should the system work it could pave the way for more exports later in the year.

“This could be a stepping stone for future expansion of the Maputo corridor,' he noted.

Just 11,000 cartons of navels have been packed to date.