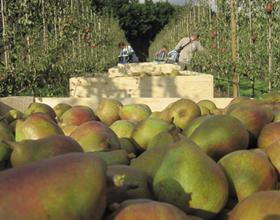 Copa Cogeca's working party on fruit and vegetables has elected Luc Vanoirbeek of Borenbond in Belgium as its new chair, with Sergio Tondini of Italy's Alleanza delle Cooperative Italiane Agroalimentare taking up the role of vice-chair.

Together, they will be in charge leading the group at a time when the fresh produce industry is facing a high level of competition, while requiring constant innovation and investment to adapt to the demands of consumers – all the while remaining economically, socially and environmentally sustainable.

According to Copa Cogeca, the leadership has outlined several key priorities for the sector, including the promotion of producer organisations in the EU as a modern and effective tool of market management, and ensuring a better functioning of the agri-food chain with the intention of fighting unfair trade practices.

Other priorities include the promotion of reciprocity in EU trade relations by eliminating tariff and non-tariff barriers to third countries, the promotion of adaption and mitigation measures to fight climate change, and ensuring that the strategic importance of the fruit and vegetable sector with regards to food safety and public health is recognised.

'In Europe the fruits and vegetables sector accounts for 1.4m farms and generates approximately €50bn of turnover, that is, 21 per cent of overall EU agricultural production and accounts for 30 per cent of agricultural employment in the EU,' the group stated. 'It is due to this strategic importance that the new leadership will focus in the upcoming period on sectors competitiveness, ensuring a higher level of sustainability and resilience and promoting the role of fruit and vegetables in the balanced diet of European citizens.'