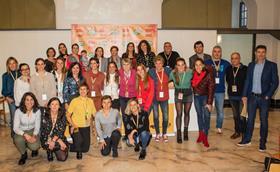 Not labelling sports as male or female, using inclusive and non-sexist language and avoiding using the physiques of athletes to make informational claims are some of the stereotypes that must be overcome to achieve real equality in the media’s representation of women and sport.

These were among the ideas floated at the first ever Communication, Women and Sport conference held in Lleida last week. The event was organised by Manzanas Livinda, Grupo Nufri’s premium apple brand, whose # EllasSonDeAquí platform celebrates women in sport.

They discussed the crucial role of the media in helping to overcome stereotypes about women in sport in order to promote equality between men and women, as well as the importance of promoting sport to people of any age, sex or physical condition.

The speakers also focused on the relationship between the visibility in the media of women in sport and their potential of attracting sponsorship.