Palmar calls for solidarity in Ecuador 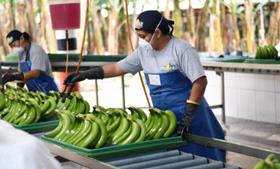 Ecuadorean banana grower-exporter Corporación Palmar has called for a united response from the sector in the face of mounting disruption to the trade caused by the Russia-Ukraine conflict.

CEO Danilo Palacios said: “Ecuador sends each week approximately 1.8m boxes of bananas to Russia, and about 180,000 boxes to Ukraine. However, as a result of this confrontation, access to these markets have become limited.

“Due to the 60 per cent reduction in exports to Russia, our country is currently facing negative consequences, especially in the local productive sector.”

According to the Banana Exporters Association of Ecuador (AEBE), since the banana industry is one of the main sources of employment in rural areas of our country, around 250,000 indirect jobs and 50,000 direct jobs are currently at risk.

“The sanctions imposed by the US and some European countries have caused the devaluation of the rouble which is a detriment to the purchasing power of the consumer, thus reducing demand,” Palacios said.

“In addition, the restrictions applied to shipping agencies destined for Russia have resulted in a negative effect, since the product has to be diverted to other countries, causing an oversupply.”

He urged the sector to find a way to place that surplus in new markets and to regulate the internal supply in Ecuador by allocating the fruit to school feeding, cattle feeding, among other uses.

Palacios also called on the government to make credit lines available for producers, so that they can purchase any supplies required to keep the fruit from losing its quality or its production level.

“Given the situation we are currently facing, Corporación Palmar reinforces its full commitment to the association of producers and exporters of Ecuador, and to the associations of small producers so that we can work together to mitigate these prejudices for the good of the industry and of our country,” he said.

Corporación Palmar has more than 3,500ha of production and exports around 20m boxes of bananas a year to Europe, Russia, the Middle East and China.