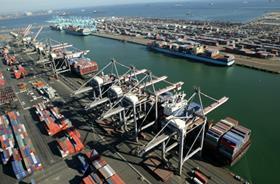 An on-going US West Coast ports labour dispute is costing US fresh produce exporters dear as it delays shipments to crucial Asian markets in the run-up to Chinese New Year.

The unresolved wrangle between the Port Marine Authority (PMA) and the International Longshore and Warehouse Union (ILWU), which started last May, is causing gridlock at Seattle, Tacoma, Los Angeles and Long Beach ports and leaving containers undelivered.

The first fresh produce sector to feel the pain was the Washington apple industry, which happens to be in the midst of its largest crop in history. The industry received welcome news when China reopened its market to U-grown apples after three years (due phytosanitary issues) – only to see orders go unfulfilled as cargo movement at the ports of Seattle and Tacoma stalled.

The next US produce sector to feel the pinch was California citrus, when the labour malaise spread to Long Beach and Los Angeles in December – the start of the navel orange season. Far fewer Washington apples and California navels made it to Chinese retail shelves in time for the Lunar New Year holidays than had been anticipated.

The port congestion has become a real problem,” admits Mark Golden of Umina Bros, a major exporter of California citrus. “Prior to the holidays, the delays at the port were around three to five days. Now its gone to more like 10 to 15 days, depending on the service.”

“There’s no way of calculating how much the Washington apple industry has lost in sales over the last three months,” says Randy Eckert of Yakima Fresh. “This would have to happen, of course, during our largest crop in history.”

“It’s a day-to-day thing right now,” says Steve Reinholt of Oneonta Trading in mid-January. “There are days when our product moves pretty well through the ports; other times everything is at a standstill. You can’t plan on anything; vessels are continually getting re-routed or skipping ports altogether. Sometimes a loaded container can sit as long as three weeks! It’s costing our industry millions of dollars.”

A similar scenario is facing the California navel industry.

“Lunar New Year shipments of navel oranges have been virtually non-existent so far,” says Steve Holly of Voita-West in mid-January. “The window for South East Asia has already passed, while China and Korea will close in a few more days.”

South Korea is the largest export market in the world for California navel growers and that country traditionally starts importing in earnest by mid-February, anticipating a drop in tariffs on 1 March.

“By March, the majority of navel oranges packed ship to Asia,” says Tom Wollenman of LoBue Bros citrus. “If this thing is not resolved and soon, there could be serious implications for the California citrus industry.”

To say that US West Coast ports are a major driver of the US economy would be an understatement.

Some US$892bn worth of cargo entered the US in 2013 via the 29 ports spanning the West Coast between the Mexican border and Canada.

According to a recent study commissioned by the Pacific Maritime Association (PMA) – the industry organisation representing shipping lines and port terminal operators servicing the region – that trade generated an estimated US$2.1tn in economic value across the US, accounting for 12.5 per cent of the nation’s gross domestic product.

That economic engine has begun to sputter lately due to a seven-month labour impasse between the PMA and the International Longshore and Warehouse Union (ILWU).

The ILWU is one of the most powerful and cohesive labour unions in the country and represents virtually all of the 20,000 dockworkers handling ingoing and outgoing cargo through West Coast ports.

Its members are also some of the best paid in the nation, with incomes averaging between US$137,000 and US$210,000, with most of their heath care costs covered by contract – something that is increasingly rare across the US work force.

While negotiations between the PMA and the ILWU began last May there has been little progress toward a new agreement.

The PMA alleges that, beginning last October, the ILWU initiated a work slow-down at the ports of Tacoma and Seattle over its displeasure with the pace of the negotiations, withholding skilled personnel from work shifts and driving equipment at a snail’s pace within the port area. Terminal yards quickly began to overflow with containers, causing ships to anchor offshore for weeks, waiting for an open berth.

For its part, the ILWU maintains that the congestion is the result of PMA incompetence, citing management’s failure to adequately prepare for the spike in container volume brought on by the recent introduction of mega-container ships, compounded by outdated port infrastructure.

By December, gridlock had spread to the mega-port complex of Los Angeles and Long Beach, prompting the PMA to call for federal mediation to settle the dispute. Although the ILWU eventually agreed to third-party assistance, accusations of poor faith bargaining and unfair tactics from both sides have continued to appear in the media, leaving little optimism that the dispute would be settled any time soon. In the meantime, it is estimated that the situation is costing the US economy as much as US$2bn per day.