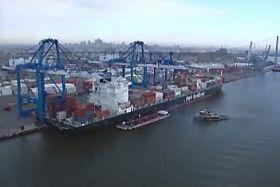 SeaLand, the intra-Americas regional ocean carrier of the Maersk Group, has agreed to expand its South American Express (SAE) service to include a weekly call to the Packer Avenue terminal. Furthermore, a joint Vessel Sharing Agreement between SeaLand and American President Lines (APL) will create a new North American Express (NAE) service, bringing an additional vessel to the South Philadelphia terminal each week.

“This is another exciting development for the future of importing and exporting from the Port of Philadelphia,” said Thomas Holt Jr of Holt Logistics Corp. “Business at the Packer Avenue terminal continues to grow, and the addition of two weekly service calls from SeaLand/APL will increase efficiency, shorten overall transit times and provide greater opportunities to expand business in both perishable and non-perishable commerce between North and South America.”

The SAE service, operated solely by SeaLand, will begin weekly calls to Packer Avenue from 3 June. The additional port call in Philadelphia-the SAE service previously terminated at Norfolk, VA-will expand SeaLand’s direct connections from Central America into the northeast, providing shippers with better access to US consumers and a user-friendly docking environment for refrigerated perishable goods. Targeted products for the SAE line include tropical fruits, frozen vegetables and paper commodities.

“We are proud to be a partner in this expansion of service that will greatly benefit our workers and region,” said David Whene, president of Greenwich Terminals, operator of the Packer Avenue Marine Terminal.

“Packer Avenue boasts state-of-the-art storage, inspection and security features, as well as a workforce that adheres to the highest level of efficiency and safety. It is no wonder that when international shippers look to Philadelphia, the choice is clear to use Packer Avenue Marine Terminal for their shipping needs.”

Weekly service for the NAE line will begin in late June, operated jointly by SeaLand and APL (pending regulatory approval). The service rotation for the NAE line will cycle between the Manzanillo International Terminal in Panama; Cartagena, Colombia; South Florida; New York; Philadelphia and Savannah.

The NAE service expands SeaLand’s network with a focus on providing more direct connections and service options between the west coast of South America, Central America, the Caribbean and the east coast of the US.