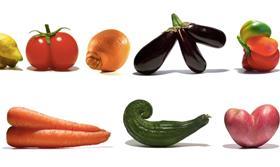 In 2015, I started a petition with What the Fork Are You Eating? author Stefanie Sacks, calling on Whole Foods Market and Walmart to sell ugly produce in their US stores. We received more than 111,000 signatures. We also spoke to Whole Foods national representatives and connected them to the company, Imperfect, in October. Since then, the two companies have been working together on a pilot to sell branded Imperfect fruits and vegetables.

This isn’t the first ugly produce grocery pilot for Imperfect, which is based in Emeryville, California. They started a pilot with upscale California and Nevada grocer Raley’s last June. Since then, according to Imperfect CEO Ben Simon, they have discontinued the Raley's pilot.

But the pilot’s end was not for lack of success. “We learned that it led to an overall increase in sales for the products we were selling. For example, we sold conventional pears and Raley's saw increased revenue overall on pears,” says Simon.

Many grocers have cited the concern that customers would shift their purchases to the cheaper option and that didn’t hold true at Raley’s. Simon says, “we see it as a success story in that regard. Raley's is going through some transitions as a company, and the person spearheading the program recently moved on, which caused momentum on the pilot to halt. We applaud Raley's as a pioneer for taking this bold step to be the first to pilot selling ugly produce in retail.”

And according to Imperfect COO Ben Chesler, Imperfect now has 2,300 active customers and over 70,000 pounds sold per month. This is after just eight months of business, and they have plans to expand to San Francisco.

On the East Coast, the Columbia, Maryland based ugly produce delivery company Hungry Harvest is also expanding. The company brands itself as 'Produce with Purpose' and has been expanding fast since signing their US$100,000 Shark Tank deal in January, Hungry Harvest has more than 2,500 customers selling 60,000 pounds a month, according to CEO Evan Lutz.

Through the Produce with Personality programme, Giant Eagle is trialing tasty navel oranges, russet potatoes, peppers, and apples for 20–25 percent of the cost of regular produce. Whole Foods will be offering produce from Imperfect at a discount as well.

US chains can offer these attractive discounts because farmers are willing to sell for less to avoid waste.Approximately 23 percent of fruits and vegetables are wasted before even arriving in stores, largely because of unnecessary cosmetic standards that large grocers and produce marketing associations impose on farmers. These standards are based mostly on appearance –no indicator of taste, shelf-life or nutrition.

In addition to selling more produce (and wasting less), lowering the price of produce has other benefits such as increased consumption by consumers. As Simon mentioned, the Raley’s pilot showed customers were purchasing more produce overall, not just shifting their purchases.

Article reprinted with kind permission, View the original here on the FoodTank website.