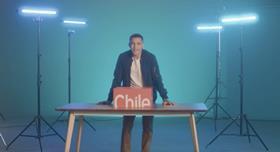 ProChile has recruited sporting superstar Alexis Sánchez as the face of its new marketing campaign.

The footballer, who plays for Inter Milan and the Chilean national team, will front the Unboxing Chile campaign, which seeks to boost exports of key products and services by promoting Chile as reliable, sustainable and high quality supplier.

Different sectors will take part in the campaign over the course of a year, from food to creative industries, services and industries 4.0.

As part of the food promotion, ProChile has teamed up with industry associations Asoex, Wines of Chile, Salmon Chile and ChileCarne to send hundreds of boxes to influencers from all over the world with typical products of the national industry inside.

ProChile said the campaign would also feature local influencers in each market.

Sánchez will also star in four videos – multi-sector, food, services/industries 4.0 and creative industries – which will be distributed by ProChile’s worldwide network of offices, as well as by exporters and other trade promotion agencies.

“We want to reach importers and consumers around the world and show them that Chilean products are top quality, reliable and sustainable, in order to increase the consumption of our products abroad and thereby increase the generation of jobs in the world,” said Jorge O’Ryan, general director of ProChile.

Asoex president Ronald Bown added: “Alexis Sánchez is one of the main ambassadors of Chile worldwide, he is a Chilean recognised throughout the world, who has managed to succeed based on his consistent and persevering dedication to his profession, always eating healthily.

“Chile offers a wide range of world-class foods, such as Chilean fruits, which are present on all tables in the world, for 12 months a year, delivering their flavour, quality and nutrition, with all the vitamins that are needed to have a healthier life.”