Reefer use rises in South Africa 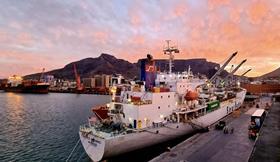 South Africa’s table grape and apple and pear exporters are increasing the use of conventional reefer spaces between South Africa and Europe, as the problems with container logistics through the port of Cape Town persist.

A fourth conventional reefer vessel is expected to load in Cape Town this week, at this stage carrying mostly table grapes and pears.

The shipment of both these fruit categories to Europe and the UK, as well as stonefruit, has been disrupted by delays and disruption to normal shipping programmes from Cape Town.

A fifth vessel is expected next week, according to Anlin Shipping spokesperson Charles Gantz.

“So far 17,000 pallets have been shipped from the old conventional reefer vessel quay in Cape Town harbour,” commented Gantz.

Anlin Shipping also supplies the regular conventional reefer programme to Western Cape citrus producers for their sterri supply programme to the US.

Hortgro’s Jacques du Preez said he expected apple exporters to also use conventional reefer programmes to relieve the pressure on the availability of containers this season.

“However, it is very expensive compared to containers and that is why stonefruit exporters have stayed with container programmes,' he explained.

'The logistics of shipping stonefruit remains difficult,” Du Preez continued. “Greater use of conventional reefers by the other categories however free up more containers for stonefruit.”

Conventional reefer shipments through Cape Town are now handled entirely differently since the hayday of conventional shipments, when Fresh Produce Terminals operated coldstores at B-, C- and D-berths in the port.

The coldstores are no longer used, and fruit arrives directly from central inland coldstores at the shipside and is loaded directly.

Although significant, the use of conventional reefers remains a drop in the ocean as far as total exports are concerned.

It is driven by growers and exporters of the more sensitive products finding themselves between a rock and a hard place due to container terminal problems, shortages and increasing numbers of container lines bypassing the Cape because of delays.

According to Gantz, it is not easy to find conventional solutions because there is great competition to acquire vessels which are in demand across the world.

“That is why it is more expensive in terms of freight, but exporters often do not have the choice if faced with the kind of delays which has almost became the norm in Cape Town,' he said.