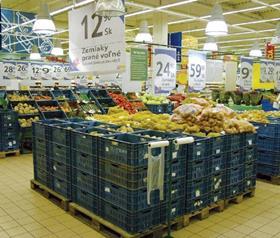 In the space of nearly two decades since the fall of Communism in central and eastern Europe, the retail landscape in three of the region’s leading economies – Poland, the Czech Republic and Slovakia – has changed almost beyond recognition.

Since this event, and particularly after the countries joined the European Union (EU) on 1 May 2004, all three have been subject to what could be described as a foreign retail invasion, with many of western Europe’s biggest supermarket chains establishing significant operations on their soil.

According to analyst Planet Retail, this phenomenon has been far more pronounced in the Czech Republic and Slovakia than in neighbouring Poland, where strict planning laws have limited the opening of large hypermarket outlets.

The Czech grocery retail market, in particular, is now heavily dominated by western European companies, the top five of which – Schwarz Group, Rewe, Ahold, Tesco and Metro – command an estimated 45 per cent of the market.

Perhaps as a result of so many retail players entering the market, the analyst revealed that the country’s hypermarket sector is now reaching saturation point, prompting several companies – notably Tesco and Schwarz Group – to begin opening smaller supermarket and neighbourhood store outlets in urban areas.

In keeping with the growth of modern retail formats in the Czech Republic, grocery retail sales have steadily increased over the last three years, from over €11.4m in 2006 to an estimated total exceeding €19.4m this year.

The rise of the western retail outlets is certainly a trend that shows no signs of slackening, given that antitrust officials in the country recently approved the acquisition of 30 Plus stores by Rewe Group-owned Penny, taking its share of the Czech market from 16 per cent to 22 per cent.

Similarly, in nearby Slovakia, western retail chains have made significant progress since 2004. Here, the top five retailers, including Tesco, Schwarz Group and Rewe, hold a 60 per cent share of the grocery retail market. The difference with the Czech Republic is that Slovakian retail cooperative group Coop Euro leads the market by some margin, operating an estimated 2,300 supermarkets and neighbourhood stores across the country. Food retail sales in Slovakia have also risen strongly in recent years, from around €4.9m in 2006 to an estimated €8.6m this year.

However, both markets are notable for the absence of one of Europe’s leading grocery retailers, Carrefour. The French-based retailer exited the Czech market in 2005, selling its stores to Tesco, while Carrefour’s Slovakian outlets have been franchised to local operators. It is perhaps worth noting that Carrefour was one of the last major western retailers to enter either market and failed to establish a significant presence in Slovakia or the Czech Republic.

Carrefour has, however, fared substantially better in Poland, where the group acquired around 200 supermarket outlets from rival retailer Ahold in 2006, significantly increasing its presence in the country.

The acquisition took Carrefour to the position of the country’s third-largest retailer behind cash-and-carry chain Metro and domestic Polish discounter Biedronka. Although UK-based retail group Tesco is not yet among the leading players in Poland, the company expanded its presence in the country in 2006 with the purchase of 200 Leader Price stores from retailer Casino. According to Planet Retail, Tesco plans to invest an estimated €145m in its Polish operations, around half of which will be used to remodel the outlets.

Given that Poland’s government shows no signs of relaxing its restriction on hypermarket stores over 4,000m2, both Tesco and Carrefour have been concentrating much of their energies on opening smaller stores of between 2,500m2 and 4,000m2 in size.

But despite the expansion of both retailers in the market, Poland’s grocery retail sector continues to be dominated by the Biedronka discount chain, which was taken over by Portugal’s Jeronimo Martins group in 1998.

Following the acquisition of 200 Plus outlets from the Tengelmann group late last year, Biedronka announced ambitious expansion plans, revealing that it intends to open as many as 240 new stores across the country before the end of 2009. However, the arrival of modern retailing in Poland has not been without its challenges for the nation’s fresh produce industry.

Bart Szatkowski from leading Polish banana importer Quiza said that when foreign retailers first arrived in the country in the late 1990s, competition “rose to an unexpected level” and new demands were placed on suppliers.

“The retail market in Poland is one of the most competitive markets in the EU because the Polish government allowed the international retail chains to establish themselves in the country,” he said.

Until2000, Mr Szatkowski explained, 90 per cent of bananasthat were sold in Poland were traded “in the old traditional way”, from importers and ripeners through to wholesale markets, then retailers before the final consumer.

In the eight years since their arrival, he said, the modern retail chains have taken over the retail trade of fruit in the largest Polish cities. Supermarkets and discount stores have also entered smaller towns, taking the place of independent shops, he explained.

Mr Szatkowski said retail clients in Poland are becoming more demanding over both price and quality, claiming they “expect the best quality banana supply service at a rock bottom price”.

He said the large multinational retail chains are also rapidly moving towards direct sourcing from producers rather than buying from importers, and he claimed that this is becoming especially prevalent in the citrus sector.

But due to the “very expensive ripening process” that needs to be carried out in Europe, Mr Szatkowski claimed bananas are now one of the few products still being supplied by importers to supermarkets in Poland and Europe as a whole.