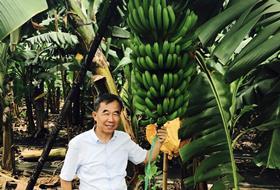 Chih-Ping Chao, head of the Taiwan Banana Research Institute (TBRI), with a mother plant of the Formosana variety

There is new hope for people in the banana business who have for some years now been very worried about the spread of Panama disease.

The Fusarium Oxysporum Cubense Tropical Race 4 (FOC TR4), or Panama disease, is already present in Southern Asia, the Middle East and Africa. It continues to move internationally with recent reports of its spread in South America.

This follows an agreement with the Taiwanese banana Research Institute (TBRI) which enables Du Roi to exclusively supply Formosana plants in Africa, the Middle East, the Caribbean Islands, the French West Indies and South and Central America.

Du Roi Laboratories, an internationally recognised contributor to the banana industry responsible for the creation of some 8m banana plants annually, has invited growers from these areas to submit their orders for a first batch of the variety.

Panama disease is currently a major concern to the global banana industry, severely impacting banana growers’ profitability and the success of the banana industry on a worldwide scale, Du Roi pointed out.

“The TBRI has achieved success in the selection and use of disease tolerant somaclonal variants of Cavendish as part of the integrated approach to sustain the banana export industry in Taiwan,' the laboratory continued. 'In Taiwan, Mozambique and the Philippines, Formosana is already commercially planted with great success to mitigate the losses caused by FOC TR4.”

Du Roi also referred to commercial evaluation trials in Mozambique and the Philippines that had also shown Formosana had a significantly higher resistance to FOC TR4 than other well-known susceptible varieties such as Grand Nain and Williams.

“In South Africa, Du Roi Laboratory’s field trials evaluating the variety under sub-tropical climatic conditions have shown very good results,” Du Roi outlined. “The field adaption commercial evaluation trials were preceded by a strict quarantine programme by the Agricultural Research Centre VOP (Vegetable and Ornamental Plants) facility in Pretoria. Here it was first tested for indexing of various viral, bacterial and fungal diseases to ensure the complete safety of the variety in the South African environment.”

According to Suné Wiltshire, Du Roi Laboratory general manager, the big advantage of Formosana is that the shape and taste of the bananas is still the same.

“Therefore, the product remains very acceptable for the export market,' she confirmed. 'We are excited to be able to support our clients and the international banana industry in this way. It serves to reaffirm our commitment to innovation to the benefit of the industry.”

Wiltshire said Du Roi was especially excited to support growers whose plantations which have been devastated by FOC TR4, to replant their plantations with Formosana. This would give them the chance to achieve high yields despite FOC TR4 being present on the land.

“It is important to note that Formosana has an intermediate resistance to FOC TR4,” she added. “It shows less severe symptoms or damage than susceptible varieties when grown under similar environmental conditions and inoculum pressure.

'The use of a variety like Formosana with moderate resistance to FOC TR4 should form part of an integrated approach to the management of FOC TR4.”