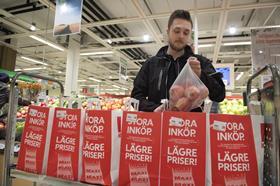 The Swedish government’s decision to avoid a hard lockdown in the face of its own coronavirus outbreak has helped keep the economy going, but with many people working from home anyway, the impact on food retail and fresh produce in particular has been mixed.

That's according toMaria Wieloch, senior category manager for fruit, vegetables and flowers at Swedish supermarket chain ICA, who says she has seen a mixed response to the crisis.

“For some supermarkets the crisis is increasing sales, but not for all,” she told Fruitnet. “It depends on their location. Some city stores are suffering because people aren’t shopping for lunch or after work. Some are growing and offering jobs to some of the people who have been laid off, which is of course good.”

The main effect on fruit and vegetables has been on prices, she noted. “Our currency is weak against the euro and transport prices are rising due to lack of drivers as well as empty lorries going back. The demand for produce as you know is increasing in Europe and production is decreasing due to less people in packhouses, fields etc, which is also affecting some prices.”

Shoppers apparently prepared for lockdown in advance, perhaps wary of Sweden's relatively soft approach. “We initially saw a big increase in things that can be stored such as carrots, onions and potatoes,” Wieloch noted.

“Despite all this, I must say we have not, as of today I must add, seen any shortages worth mentioning – except for some exotics maybe. We are well aware that this might change in some weeks but the indications we get are that, for now, as long as we place orders a bit more in advance so that our suppliers can manage to harvest and pack with less staff and lower production rates, we will receive what we order. But as I said, for some produce the prices are higher.”

A bigger concern, however, is the country's upcoming harvests. “There are indications that we will lack about 8,000 people to pick and pack Swedish produce due to travel restrictions and quarantine rules for foreign workers. We import most of the seasonal workers from Europe and due to the restrictions, as well as the poor exchange rate which puts off some workers from the beginning, there is a big worry among farmers that they will not be able to harvest their crops, which would be a huge catastrophe.”