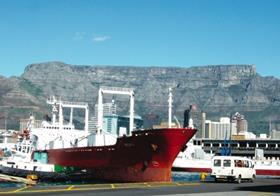 “By 30 July, volumes had increased, container terminal performance had improved and only one container vessel was at outer anchorage, reduced from nine vessels just two days earlier,' a statement said. 'Transnet Port Terminals (TPT) believes that the backlog of cargo will be cleared by mid-August, after last week’s inclement weather delayed progress and shifted the original target of end July.”

“Marine operation human capital has improved - from 60 per cent capacity at the beginning of July due to positive cases of Covid-19 coupled with employees in quarantine, to 100 per cent as of 30 July,' said Dweba-Kwetana. 'All marine pilots have been on duty throughout the month.

'Transnet National Ports Authority (TNPA) has been able to offer a full marine service to move vessels in and out of the port. The full marine fleet available includes two tugs, and a third tug on standby, one workboat, one pilot boat and one launch.”

The port authority continues to keep the industry and users informed. “Progress to restore full operations are shared bi-weekly in TNPA and TPT’s bi-weekly virtual meetings with all port stakeholders, including private operators, shipping lines, the Department of Economic Development and Tourism (Western Cape), as well as industry bodies,' Dweba-Kwetana continued.

“Although operators from Durban returned back to Kwa-Zulu Natal (KZN) on 29 July, the terminal would maintain the six-gang operation due to Cape Town employees being back at work,' he noted. 'Preparations to introduce the seventh gang in time for the reefer season were underway with recruitment and training progressing well.”