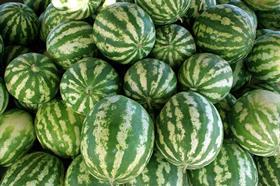 The Tunisian ministry of agriculture has revealed that the country's exports of summer fruits rose by some 17 per cent for the year to mid-August, according to a report from AllAfrica.com.

Volumes reportedly reached 32,500 tonnes, compared with 27,600 tonnes for the year-earlier period, with watermelons accounting for 54 per cent of this total and stonefruit 28 per cent.

According to official forecasts, exports of summer fruits should approach 41,000 tonnes for the full year, close to the record volume of 45,000 tonnes exported in 2010.

The main destination for Tunisian summer fruit exports remains the Libyan market, with 13,000 tonnes, or 40 per cent of the total export volume, sent so far this year.

This figure compares with the 7,000 tonnes exported to Libya the previous season.

Total fruit exports from Tunisia stood at some 140,000 tonnes for the year to mid-August, up from 130,000 tonnes in the year-earlier period, with dates, citrus and summer fruits the main products.