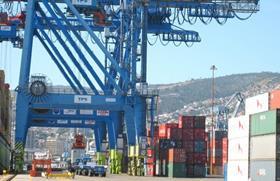 Chilean shipments of table grapes and other fruits to the US are being hampered at the peak of the campaign due a lower availability of ships in the Port of Valparaíso.

Jorge Valenzuela, president of producer association Fedefruta has called for shipping companies to prioritise fruit shipments over the next two weeks while Chilean exports to the US are still in the tariff-free window.

“We are talking about a product that is very perishable, and that dictates when it must be harvested, packed, and transported. We believe that the fruit should have priority in these weeks of the year,' he said.

Fedefruta said the problem is being compounded by a lack of stevedores at Valparaíso and called on the port’s operators, TPS and TPV, to commit to increasing fruit exporting capacity in the coming season.

'We are in the critical weeks of the table grape season, when we find the largest volume of fruit, and right now we do not have enough ships in the ports to send it to its destination,' Fedefruta said.

On these dates, table grapes and stonefruit shipments from the central production areas of Valparaíso, Metropolitan and O'Higgins regions are in normally full flow, while the last blueberries of the season are also being shipped.

'However, if before there was room to work with more than four chamber vessels a week to transport the fruit to the US, now we only have two,' said Valenzuela.

So far in January and February of this year, almost 75 per cent of the volume of Chilean table grapes has gone to the US, according to figures from Odepa.

'Now in March we find the harvest of this fruit in the central area, especially in the O'Higgins region, where the whole world and the rural communes are at the forefront of harvesting and packing tasks,” Valenzuela said.

He noted that 'fruit is a job on which hundreds of thousands of people who dedicate themselves all year round to various tasks in the orchards depend, to see the results of the harvests these days, and the lack of ships right now to shipments of fresh fruit is a problem that compromises all that effort”.

“We understand that the ports, such as Valparaíso, with which we have held talks as a result of these difficulties, are in high demand for import and export shipments of all kinds of goods,” Valenzuela continued.

'There are other exporting items from our country that ship all year round, table grape producers do so only during these weeks of the season, and between now and the end of the month we will have critical days in which we do need more space to ship and more stevedores to work the loads”.