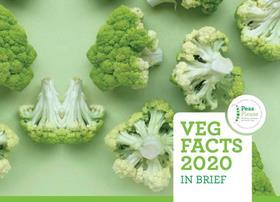 Putting veg at the centre of school meals, revamping the Healthy Start scheme and focusing farming policy on developing horticultural production would substantially boost the UK’s consumption of vegetables.

That’s according to a new report by the Food Foundation’s Peas Please campaign, which has drawn together key statistics and called on policymakers to make changes for the good of the nation’s health.

The ‘Veg Facts: in Brief’ report found that given the likelihood of a global recession as a result of Covid-19, it’s never been more important to ensure universal access to affordable fresh produce. The challenge is particularly magnified in the context of Brexit and the traditionally underfunded UK horticulture sector.

The report draws together statistics from a range of sources and makes for some troubling reading as Brits continue to fall short of fruit and veg consumption targets. Public Health England recommends people eat close to seven portions a day – 550g – but the reality in 2016 was an average of just 300g per day.

The issue isn’t helped by the fact the UK imports so much of its fresh produce, according to the Food Foundation. In 2018, the country imported 52.7 per cent of all its vegetable requirements, with post-Brexit trade concerns focused on the fact that over a third (36.5 per cent) of its veg is imported from the rest of Europe.

To help boost both production and consumption, the Food Foundation has called on policymakers to focus on three key priorities. Firstly, it points out that Scotland and Northern Ireland are now proposing that two portions of veg are included in every school meal as part of new school food standards, and it wants England and Wales to follow suit.

It says the uptake of food vouchers for low-income families is at an all-time low and wants to see urgent reform of the scheme. It says the promised consultation has not materialised and it needs to be a priority given the extent of food poverty and financial hardship caused by Covid-19.

Finally, in the wake of Brexit it wants to see agricultural policy support a commitment to develop a thriving horticulture sector across the devolved nations, with each nation pushing for national fruit and vegetable action plans to support both production and consumption of veg.