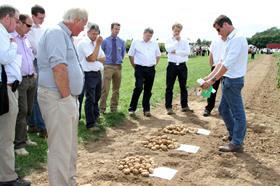 Pioneering agronomist Dr David Firman has been awarded the British Potato Industry Award 2019 in recognition of his valuable contribution to the sector over 30 years.

Throughout his career with Cambridge University Farms (CUF), where he also completed his PhD, Firman became known for his attention to detail. He initially worked on crop pathology and later focussed on key aspects of agronomy.

Firman was appointed head of research at CUF and stayed in the role until he retired, helping secure the success of CUF’s acquisition by the National Institute of Agricultural Botany (NIAB).

Presenting the award, Churchill said: “From identifying significant events in the potato life cycle through to studying concepts like how the chronological age of seed affects the growing potato, David has contributed significantly to the critical mass of peer-reviewed literature over 30 years and has been a leading force in the industry.

“He helped introduce optimised seed rates and develop the industry’s understanding of crop structure and architecture.

“Alongside his academic research, David recognised the research requirements of commercial partners within supply chains and has driven many of the strong relationships NIAB-CUF now has within the potato sector.”

Also at the event, Graham Tomalin was awarded AHDB’s Above and Beyond Award, which is presented every year to someone who has made a significant impact through the support given to their clients and networks.

Hiscareer started with Anglian Produce and then Greenvale. After a three-year stint as farm manager with James Foskett Farms, Tomalin joined VCS Agronomy as a potato specialist and has become a familiar face at AHDB’s Strategic Farm programme with a particular focus on some of the key crop protection challenges faced by the sector.

Churchill said: “With emails and phone calls to clients at 5am, days start early for Graham. His immense knowledge is of great value to the grower, supply chain and researcher.

“When it comes to helping us find the herbicide and desiccant solutions, we are going to rely on for years to come, he’s had the foresight to consider the newer up-and-coming varieties alongside popular varieties such as Maris Piper and King Edward.”

Now in their 23rd year, the annual Potato Industry Awards are presented to two individuals, rather than businesses. Winners are chosen by an independent judging panel from candidates nominated by their peers.