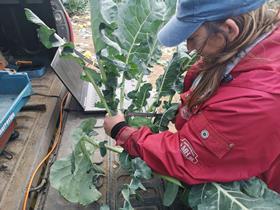 A series of trials have been conducted over the brassica-growing season atAHDB’s Strategic Centre for field vegetable crops, based at East of Scotland Growers (ESG) in Scotland.

The two-year programme of grower-led trials at ESG’s fields in Balmullo, Fife is looking at methods of preventing downy mildew in broccoli and cauliflower and the impact of bio-stimulants on crop health and vigour. Herbicide screening pre- and post-planting, as well as the use of herbicides that have shown promise in AHDB’s SCEPTREplus trials, are also being trialled on site.

AHDB’s regional programmes allow growers to research issues which due to the variations in regional climate are unique to their areas, the levy body explained.

James Rome, agronomist at ESG, said: “We are finding that downy mildew is a growing concern in brassicas, particularly here in Scotland. This is due to the way we process the crops as we produce prepared broccoli in florettes. We wanted to trial a range of fungicides to try and minimise its impact and approached AHDB for support.'

Angela Huckle from ADAS is leading the trials on behalf of AHDB and ESG. “We are comparing a number of conventional fungicide programmes such as Amistar and Revus, alongside a biological fungicide to treat the crops,' she said. 'Downy mildew appears as blemishes on the underside of the broccoli or cauliflower’s leaves which sporulate producing a white downy fluff like mould which releases new spores further reinfecting the plant and others around it. This can become systemic and once it’s in the broccoli or cauliflower head it creates grey streaking in the stems. When you divide it into florets the streaking makes the brassica unsaleable.

“In the broccoli downy mildew trial, although disease levels were low, we were still able to determine that at the first assessment there was a significant reduction in foliar downy mildew in the broccoli sprayed with Revus + Phase II. It became clear this product gave the greatest reduction in mildew lesions throughout the trial. Revus was recently authorised for use in flowerhead brassicas and Brussels sprouts and during the trial it performed better than the current standard, Amistar. I would hasten to add that it is good to integrate both modes of action in a fungicide programme to consolidate resistance development.”

A suite of herbicide trials using the three most promising products to come out of the AHDB SCEPTREplus programme are being run to look at how they respond on broccoli, points and Brussels sprouts which are all commonly grown in Scotland.This mirrors the work on SCEPTREplus carried out on cauliflowers at AHDB’s strategic centre for field vegetables in Lincolnshire but demonstrates results on crops grown solely in Scotland.

Huckle continued: “A coded product in the trial - AHDB 9987- should gain authorisation in 2021, and the trials showed it to be safe to use over all the crops, and is best used pre-planting, or very soon after planting before weeds have germinated. Itdemonstrated control of grasses and weeds, particularly fat hen. This product could provide a useful alternative to metazachlor in the future.

“For post-planting use, once weeds have emerged, AHDB 9875 gave very good, and almost complete control of the weed species in the trials. This product is a bit further from authorisation, but the trial has shown that it is safe to use over all the brassica crops, and also encouraged the agchem company to pursue the product for brassicas.

“A third product, AHDB 9840, would help with control of fumitory. But we learnt from the trials is that while it doesn’t cause any adverse effects to broccoli, cauli or points, it is unsuitable for use over Brussels sprouts.The results from the trials are significant and have provided us with really useful information.”

The brassica crops were planted at the end of May, with the herbicide trials the first to be carried out. Applications of three different products were applied to crops of broccoli, cauliflower and brussels sprouts. The products selected for trial were based on those that were the closest to approval and the most promising in AHDB’s SCEPTREplus programme, whichresearches sustainable plant protection products for use in horticulture.

AHDB is working in partnership with farmer-owned cooperative East of Scotland Growers, who produce broccoli and cauliflower, and Kettle Produce, who grow brussels sprouts and swedes, to carry out the trials.ADAS is the subcontractor in charge of the trials, which are being conducted by Oxford Agriculture Trials. NIAB is also a partner in the project.

The Scottish Strategic Centre for field vegetables - Brassicas complements the current AHDB strategic centres for field vegetable crops, one in Cornwall, which conducts ‘core’ variety evaluation trials each year and one in Lincolnshire, which conducts grower-led trials. Additional funding is available specifically for grower-led areas of work and the new centre is the result of such a grower-led initiative where specific problems that occur in Scotland can be addressed.