All stick and no carrot 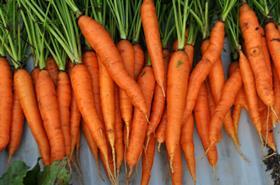 UK root veg growers are “playing with fire” as serious value deflation is forcing them to take risks to reduce costs, says one leading producer.

Years of slashed retail prices – 1kg of carrots at Aldi last Christmas, for example, cost 14p amid a price war with Lidl – are taking their toll on the sector, which has had to make huge investments in mechanisation in an effort to reduce labour expenditure.

Rising production costs, combined with post-Brexit challenges securing skilled workers, straw and logistics, are pushing many growers to their limits, says Martin Evans former chairman of the carrot growers association and CEO of FreshGro, a root veg cooperative in Nottinghamshire with a farming base of 20,000 acres.

“Growers are having to make cost-based decisions, rather than the best decisions,” he says. “Most of us are playing with fire: we are taking risks to reduce costs.

“The values are so low now,” he continues, “that it’s taking people out of the sector and we are seeing rapid consolidation. Last year, two large players ceased production - Ken Coles and Alan Bartlett – and there are rumours of more to come this year.

“Retailers have been using produce, particularly root veg, as a discount item to vie for customers. This can’t go on.”

Evans recalls how a decade ago, carrots consistently retailed for around £1 per kg, while the hourly rate for a packhouse worker was £4.80. These days, basic pay is closer to £10; electricity, packaging, haulage and input costs are all up too; while at the time of writing, a kilo bag at Sainsbury’s and Aldi cost 40p.

Demand for UK root veg, meanwhile, is enjoying a record high. According to Kantar, last year, carrot sales in volume rose 10.5 per cent and parsnips rose 11.9 per cent as the coronavirus pandemic brought about a surge in scratch cooking. Sales value for these crops, though, fell 6.6 per cent and 2.4 per cent respectively.

Evans believes these rock bottom prices for fresh produce are giving out a toxic message. “It’s telling consumers that these things are worthless,” he says. “A cultural shift is needed in the UK to respect fresh produce and food more. In France, a kilo of carrots costs around euroe2.5, in Holland it’s similar. And in the US, it’s even more. The UK as a nation is really disrespectful to produce and food.”

At the same time, Tim O’Malley of Nationwide Produce points out, retailers are constantly pushing suppliers for things they expect free of charge, such as environmental sustainability, while offering a financially unsustainable price.

“Now more than ever, we need customers and suppliers to work together,” he says. “Customers to accept costs are up across the card, and suppliers to push for fair and reasonable price increases.”

“There has got to be a recognition that things have got to cost more,” he tells FPJ. “We have bled the system dry on every count, and we have got to have a reset on what it takes to produce good quality food, and what that food needs to cost, because we cannot carry on responding to demands to get more efficient. That’s what’s been happening over the last decade and there is no room for manoeuvre anymore.”

To achieve that recognition, Ward advocates improved industry-level dialogue with retailers to enhance a sense of partnership between growers and the supermarkets. Then, together, they must communicate this value message to end-consumers.

“Inflation can only be a good thing,” adds O’Malley. “On a supply level, it stops the UK pushing more production abroad. We already import two-thirds of our fresh produce – no-one wants to see that increase. For retail customers it brings the benefits of increased margins. We need to work together to build a more sustainable fresh produce industry – environmentally and financially.”