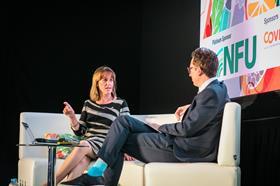 NFU president Minette Batters has expressed her frustration at working with a government that is “very, very conflicted in what it is trying to achieve” after Brexit.

Speaking at FPJ Live in Coventry yesterday (8 October), she said it was “unprecedented” for the farmers' union to be working with a government marred by the current level of internal conflict between departments.

Ultimately, it is down to Prime Minister Boris Johnson to decide what he wants the country to look like, she noted, but he too has contradicted himself on various topics in the past couple of months – on issues such as importing hormone-treated beef and chlorinated chicken from the US.

This has led to very “lightweight” policy discussions, Batters complained, and when it comes to discussions on future trade deals and food standards, she said the government has been unable to give the NFU assurances that animal welfare and environmental protection will be maintained.

“When we started this [Brexit] journey, we were going to have higher standards, public monies for public goods, and now look at where we are,” she said.

“They’ve pulled it together once and then put it aside again and I think now the conflict resides between the Department for International Trade and Defra.”

On the burning issue of a US-UK trade deal, she warned that agriculture will inevitably form part of the agreement, and this could lead to imports of food produced to lower standards, which could harm British producers.

Regarding the future trading relationship with the EU, she predicted that if Britain leaves without a deal, “there’s every chance” it will be told to “wait in the queue” for a Free Trade Agreement to be agreed. This is a worrying prospect for the fresh produce industry given how much fruit and veg is imported from Spain in particular.

Further concerns were raised about the likelihood of the government allowing enough seasonal workers to enter the UK through a pilot SAWS scheme, especially given how politicised the issue of immigration has become. However, Batters remained optimistic about opportunities to boost domestic production of fruit and vegetables after Brexit.

“I think there’s a massive opportunity for a sort of horticultural revolution,” she said. “We should be growing much more of our fruit and veg here than we are.

“We have had successive governments that have not seen the opportunity of horticulture, and growers have been very much working with their own ambitions through their PO structures. I think Brexit has opened the eyes of politicians to what an amazing industry this is.”

The rising cost of imports, people switching to more plant-based diets, and a rise in scratch cooking could help drive this trend, but Batters stressed that an increase in UK production would need to be “incentivised by a government that really wants to work in partnership with the industry”.