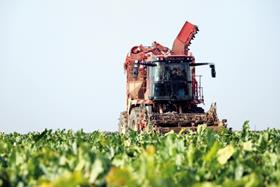 Both short and mid-term confidence among British farmers has remained negative for the third year running, the NFU’s latest Confidence Surveyhas revealed.

Confidence is critical for all businesses as it influences production, investment and growth intentions, the NFU said, and so has a wider impact on farming’s economic contribution as well as food production.

One of the key concerns among farmers is the phasing out of the Basic Payment Scheme, with 78 per cent of respondents saying they believe it will have a negative impact on their business.

Payment rates for the government’s newEnvironmental Land Management (ELM) scheme, which will replace the BPS, have yet to be published.

NFU members’ second-biggest concern was the rise in input prices and changes to regulation and legislation due to Brexit.

The survey also showed that 44 per cent of farmers and growers have been impacted by the pandemic, with the figure jumping to 73 per cent for horticulture businesses.

NFU president Minette Batters highlighted that levelling up rural areas would help build confidence within the industry and boost business and investment opportunities for farmers, in turn delivering more for the country.

Batters said: “The fact that both short and mid-term confidence has remained negative since 2018 is very telling of the uncertainty and challenges farmers continue to face.

“Farming is a long-term business. Confidence in our businesses is absolutely crucial if we are to continue to be productive and profitable and the driving force behind sustainable, climate-friendly food production around the world.

“Yet this survey shows that many farm businesses are still reeling from the impacts of the pandemic and that there is lots of apprehension about the significant changes to rules and regulations coming down the tracks.

“It is not surprising that the phasing out of BPS is the top concern among our membership. Farmers will start seeing payment rates being reduced this year, without any new schemes to replace this income and a lack of detail about the interim and future schemes.

“Not knowing what kind of standards will be involved in these future schemes makes it very difficult for farm businesses to plan for the future.”

She added: “Farmers need to know that the government is supporting them and investing in rural Britain.

“We need to know that the government is working to level up urban and rural areas and resolve issues such as rural planning, rural crime and inefficient broadband and connectivity.

“Investment in these areas will help build confidence and provide more opportunities for farm businesses.”