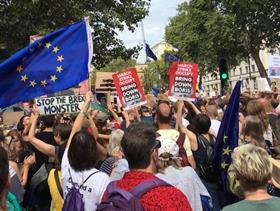 The UK Parliament, controversially shut down this week by prime minister Boris Johnson, has finally compelled the government to publish secret documents assessing the likely impact of a No-Deal Brexit.

Following weeks of resistance from Johnson, the scale of the chaos anticipated has at last been laid bare in the government’s own Yellowhammer report, including rising food and fuel prices, major delays at ports, disruption to medicine supplies and public disorder.

The government attempted to paint the dire forecast as a worst case scenario, but an earlier leak of the document suggested otherwise.

Rosamund Urwin of the Sunday Times highlighted one key difference between the new Yellowhammer document, which is headlined ‘HMG Reasonable Worst Case Planning Assumptions’, and the version leaked just last month, which was entitled ‘Base Scenario’.

“The lack of trader readiness combined with limited space in French ports to hold ‘unready’ HGVs could reduce the flow rate to 40-60 per cent of current levels within one day as unready HGVs will fill the ports and block flow,” it said.

“HGVs that are caught up in congestion in the UK will be unable to return to the EU to collect another load and a proportion of logistics firms may decide to avoid the route should there be significant and prolonged disruption,” it stated.

Meanwhile, supplies of “certain types of fresh food”, as well as chemicals and packaging, are expected to be reduced, the document warned.

“In combination, these two factors will not cause an overall shortage of food in the UK, but will reduce availability and choice of products and will increase price, which could impact vulnerable groups,” the report stated.

“The UK growing season will have come to an end and the Agri-food supply chain will be under increased pressure at this time of year, due to preparations for Christmas, which is the busiest time of year for food retailers,” the document continued. “Government will not be able to fully anticipate all potential impacts to the agri-food supply chain. There is a risk that panic buying will cause or exacerbate food supply disruption.”

Significant disruption to trade is also expected on goods entering Ireland due to the automatic application of the EU tariff and regulatory requirements. Some businesses are expected to relocate or stop trading, while others will experience higher costs that may be passed on to consumers.

“The agri-food sector will be the hardest hit, given its reliance on highly integrated cross border supply chains and high tariff and non-tariff barriers to trade,” the report said. “Disruption to key sectors and job losses are likely to result in protests and direct action with road blockages. Price and other differentials are likely to lead to the growth of the illegitimate economy.”

Steve Murrells, chief executive of the Co-op, has expressed concern over fresh food shortages and higher prices in its supermarkets, particularly for items like blueberries, apples and pears, which are imported during the winter.

Murrells said that retailers might have to fly in supplies of fruit should the chaos predicted in the Yellowhammer report prove accurate, causing prices to surge.