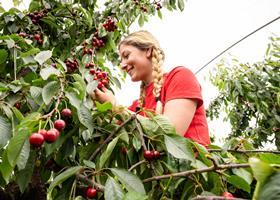 Tthe UK is primed for a promising cherry season, with around 5,500 tonnes of home-grown British cherries expected to hit supermarket shelves this year.

The new figures have been announced by industry body Love Fresh Cherries, which represents both British and imported fruit. The prediction falls just short of last year’s bumper 6,000t harvest due to early frosts, but the British cherry sector is nevertheless predicting a year of good availability for retailers and consumers alike.

Love Fresh Cherries, representing cherry growers from Kent, Staffordshire and Hampshire to Lincolnshire and Essex,says that consumers will start to see British cherries in stores from mid-June, building to the main peak of the harvest from early July through to August.

Late-season fruit will come from Hereford and Scotland, meaning good availability of UK cherries for shoppers all the way through to late September.

Favourable conditions from the good winter chill has led growers to anticipate another high-quality crop among most varieties, with an abundance of large and juicy fruit, according to the trade body.

Spokesman Matt Hancock said:“All the signs are in place for another promising 2021 British cherry crop, as demand for fresh cherries continues to grow, with around 20 million kg of cherries enjoyed across the country last year.

“Despite the relatively unusual stormy weather and cooler spring temperatures, causing a delay in earlier varieties like Merchant and Grace Star,this has had no impact on fruit quality so far.

'In fact, we’re looking forward to another strong crop of big, juicy cherries, that are bursting with goodness, at a time when healthy eating continues to be a high priority for us all. All indications are currently positive for another strong British cherry season.”