Chiquita aims for smiles on faces with new campaign 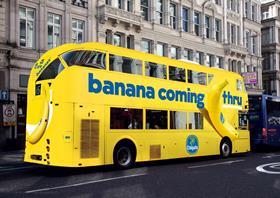 Selected London buses will be turned yellow from 17 July

Now entering the third year of its UK marketing drive, Chiquita has approached from a new angle with its latest campaign. The ‘We Are Bananas’ promotion, which will hit central London for four weeks from 17 July, will continue in the same fun, light-hearted vein of last year’s ‘Just Smile’ campaign. This time, however, the emphasis will be slightly different.

The new campaign will see London buses and black cabs turned yellow and emblazoned with Chiquita branding and fun tag lines such as ‘so healthy it looks like it’s doing a sit up’ and ‘delicious straight or bendy’. In addition, 180 digital screens will display Chiquita adverts at central tourist destinations across the capital, with Cockle joking that the company is “doing its very best to turn central London yellow.”

The British campaign will by no means be confined to the capital, however, with a nationwide sticker campaign drawing on the popularity of the recently released hit animation Despicable Me 3. Chiquita bananas will sport stickers of minions, the beloved creatures that star in the film, and a pouch of collectible stickers will be attached to two or three clusters of bananas in every box exported to the UK.

Across the pond the American brand launched a similar We Are Bananas campaign in Chicago, Cincinnati, Los Angeles and New York in April this year, with a second wave of marketing hitting the the US this summer. In otherEuropean markets, meanwhile, the company is continuing with the Just Smile campaign that it launched back in 2012.

The obvious target with the UK sticker campaign is parents buying fruit for their children, but Cockle insists their appeal stretches much further. “Mums buy bananas and kids love minions so it ticks both those boxes,” he says, “but I think the appeal of Despicable Me 3 goes beyond kids collecting stickers. Some of the young millennials will have grown up with this franchise, so there’s really high awareness among that age group as well.”

The campaign’s message to the fresh produce trade, Cockle says, is about building the brand’s credentials. “We’re launching this drive within a very important category in the retail space so we’re creating a point of difference,” he says. Chiquita is also supporting Britain’s wholesale and foodservice sectors, Cockle adds, with London “particularly strong” in these areas.

In a bid to drive sales and continue to build brand awareness, the company has upped investment in UK marketing since the merger with Brazilian juice giant Cutrale and banking group Safra at the start of 2015 – “it really is a long-term strategy”, Cockle says. But the strength of the new campaign will ultimately rest not on its budget, but its emotional impact – the extent to which it really makes people smile. Only time will tell if the playful taglines will do the trick.