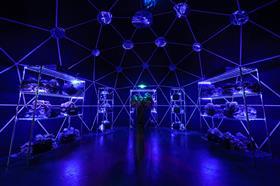 Millions of Brits living in towns and cities across the UK are currently in the grip of an 'urban farming frenzy', according to reserarch by electronics giant Samsung.

The company found that 60 per cent of those surveyed in urban areas claimed to want to grow their own produce at home, with almost three quarters (72 per cent) of 18-24 year olds tending to mini crops or plants on windowsills (23 per cent) and bedrooms (20 per cent).

Samsung says the pandemic has created an urban farming boom, with almost two thirds (63 per cent) of Brits in cities inspired to grow more of their own food and plants at home.

Some37 per cent of Gen Z respondents said they were interesting in growing at home to have access to fresher food, followed by a desire to save money (35 per cent) and do their bit for the planet (33 per cent)

Brits overall said they grow at home to consume more nutrient-dense food (35 per cent), to eat more fruit and veg in general (33 per cent) and to educate their children about how we grow food (27 per cent).

Over a third (38 per cent) said they haven't got involved due to a lack of knowledge, while a further 41 per cent cited lack of space or light (32 per cent) as their main barriers to growing at home.

A third (32 per cent) cited ‘lack of headspace’ or simply ‘forgetting’ to care for their plants – an issue which Samsung said technology can help to overcome.

The study of 1,500 Brits living in urban areas was released in line with the launch of Project Plant, Samsung UK’s new initiative, which it described as the UK’s 'first urban-farm-to-table pizzeria' in collaboration with social enterprise GreenLab.

Through Project Plant, Samsung and GreenLab hope to educate and empower individuals and communities to harness the power of connected technology and support small space growing. This will help to facilitate small changes that make a big difference to how and where plants can be grown, the firms said.

The launch of Project Plant supports a wider trend of people living in cities turning to technology to take the guesswork out of growing their own, with over half (55 per cent) using technology when growing from home to enhance the growth of plants.

This ranges from adapting nutrients (60 per cent) to controlling temperature (55 per cent) and moisture (52 per cent). In addition, 40 per cent of urban Brits would welcome digital reminders via apps to water their plants and over a quarter (28 per cent) would benefit from a connected hub to switch on growing lamps during colder months when needed.

An overwhelming 74 per cent believe technology can assist us to grow our own food and plants at home, while a further 43 per cent claim that technology will create greater opportunities to become self-sufficient, allowing us to keep up with demands on the food system (41 per cent) and empower more people to grow their own (45 per cent).

Amy Campbell, director of corporate marketing at Samsung Electronics UK & Ireland, said: “We are encouraged to see that so many people are already growing their own produce, and that connected technology is viewed as an integral part of shaping the future of our homes and cities.

'Through Project Plant, we hope to further inspire our customers, and demonstrate how connected technology can help power small space growing.”